The light in one of the closets in my house went out recently.  Usually, this isn't a big deal, I just go to my local home improvement store,buy a new one, and all is good.  My house is about 16 years old now, and the last closet light that went out ended up having a bad ballast in the fixture itself, so the new fluorescent tube was did no good at all.  That time, I ended up having to replace the fixture itself.  I chose to replace the aging 24 inch fluorescent fixture with a modern Light Emitting Diode (LED) fixture.  Why?  Even though it was more expensive than a new fluorescent fixture, and a new fluorescent tube, the payoff came in two ways.  First, the old fixture drew 17 watts of energy, which was not much, but I knew I could do better.  Second, over the last sixteen years, I've had to replace the tube at least three times, at about 7 or 8 dollars a pop.  The new LED fixture draws about 7 watts, and I will probably never have to replace it in my lifetime.

So, the new closet light was in a larger closet.  This fixture was 48 inches long.  Before replaing the bulb, I took a look at the ballast.  It was swollen and had leaked some tar-like substance.  I figured it had to go, with the assumption that it would not last more than a year or so, if that..  A new replaceent LED fixture was a little pricey; $60-70 depending on wattage/brightness.  I decided to try something different.  Using parts on hand from other projects, I reworked the existing fixture into an LED model.  My estimated cost was about $15-20.  Read on to see how I did it. 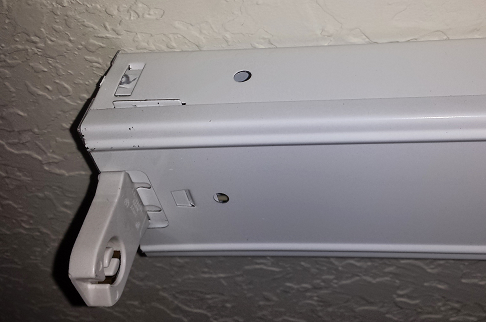 The old fixture was a single tube, bare, 48 inch fixture.  I'm sure it was the lowest price fixture that the contractor could find when the house was built.  This type of fixture was new enough that if did not require the old "starter", but instead had an all in one ballast.  It drew 32 watts of energy, so wasn't horribly inefficient or anything, and was suitable for a medium to large sized closet.  My biggest issue with this type of light was that it doesn't stay on all the time, only when you needed to go into the closet three or four times a day.  I've noticed that this kind of duty cycle seems to be tough on fluorescent lights, and this closet was no exception.  It seemed that I was replacing the tube on it about every other year.  So, what it was saving on electricity was costing me even more in hardware as time rolled on.  Combined with the ten foot ceiling where it was mounted, I had to get out a ladder every time it needed replacing.

First off, a word or two on caution.  I recognize that folks read articles such as this one, and use them as guidelines for their own projects.  I'm putting up what I did, and if anyone wants to do something similar, I have all the encouragement in the world.  If you choose to do something along these lines, be mindful of areas you can get yourself into trouble,  Electricity can be dangerous, and improper electrical connections can cause injury, and there are electrical codes in place for most communities that are meant to protect you, your property, and the safety of others.  Unless you are a licensed electrician, or otherwise experienced and proficient at performing electrical work, you should not attempt to do this yourself.  The original and replacement light are both connected to your home's electrical system, which is strong enough to cause serious injury or even death.  Do not attempt if you are not sure.

OK, that being said, the first thing I did was throw the breaker that supplies power to the fixture.  After removing the tube, and disposing of it properly, I removed the cover to the fixture itself,  The cover is just that, a cover.  It had no electrical components attached to it, and was easily removed with a kind of thumbscrew twist lock fastener. This exposed the ballast, the wiring, and the tube sockets at either end.  I disconnected the ballast, which was tied into the houses's electrical wiring with wire nuts.  I put the wire nut back on to the supply wires for safety.  Once the fixture was disconnected electrically from the house wiring, I removed the ballast and the two end sockets and discarded them.  I kept the cover, as that was going to be part of the conversion.  The fixture itself stayed mounted to the ceiling just as I found it. 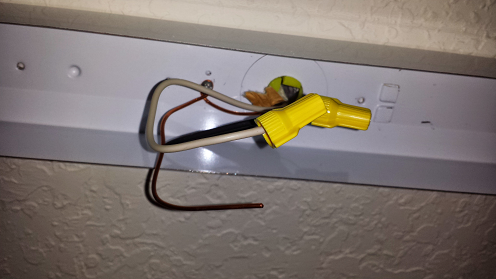 The type of LED strip light I chose to use was a variety that came with a peel and stick backing.  It comes in a spool of 5 meter lengths, and can be cut to purpose.  One simply cuts it with scissors in the areas designated, and then wires are soldered onto one end or the other to supply power. 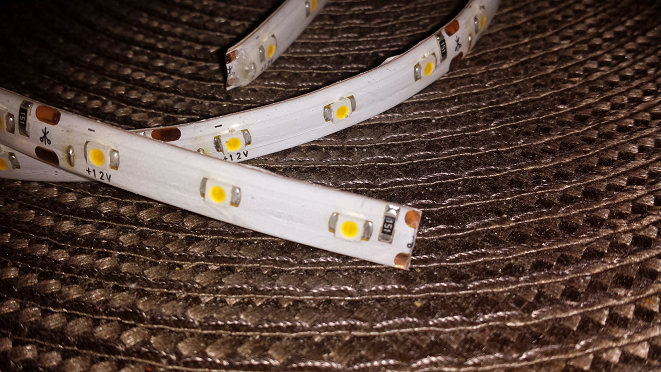 From the spool, I cut two one meter lengths of the LED strip, being careful cut only where indicated.  The clear, flexible outer coating of the strip must be carefully cut away from the small copper pads at the freshly cut endpoints of the strip.  I used an Exacto knife.  Then, using a low temperature soldering iron, I attached red (for positive) and black (for negative) to the the exposed pads, making sure I had the polarity correct.  I did this for both strips, and made the wire length long enough to run all the way back to the center of the fixture, where I would be mounting the LED driver.  To make the far ends of the wire neater, I went ahead and tinned the stripped ends with the soldering iron

Before attaching the self sticking strips to the outside of the fixture cover that I removed earlier, I placed a small square of electrical tape on the cover, underneath the area that the end of the strip (with the wires attached) would be fixed.  This was done just in case one of the soldered connections came into contact with the metal cover of the fixture.  Next, I removed the backing from the LED strips, and secured them to the metal fixture cover, and ensured that the wired ends were over the little squares of electrical tape I just placed. 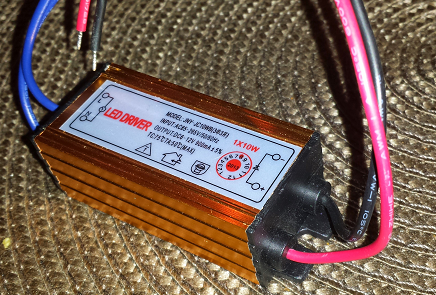 Next, I installed the LED driver into the old fixture using the same hardware that I removed from the old ballast.  The LED driver I chose for this project is capable of driving 10 watts of LED's, which in this case is enough to cover two meters of LED strips, with a small reserve.  With two new wire nuts, I secured the alternating current (AC) side of the LED driver to the house current.  This left two Direct Current (DC) 12 volt wires remaining, one red, and one black.

Finally, I reattached the fixture cover and twisted the fastener into place,  Since the old fixture was not moved or removed, the new configuration is exactly the same form factor, except for the reduced additional height of the old fluorescent tube. 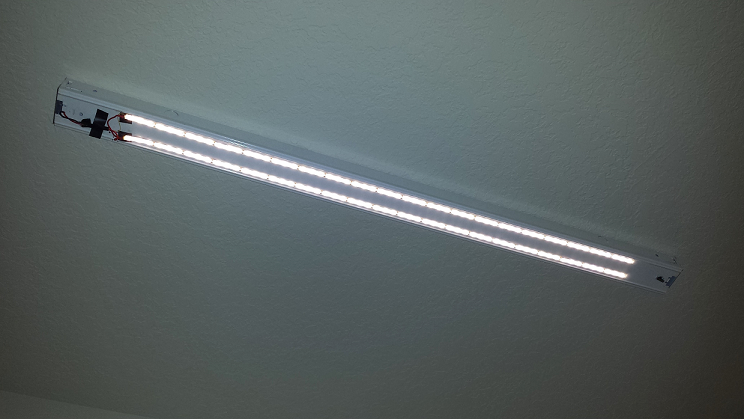 I flipped the breaker back to the on position, and tested out the new light.

The new fixture only draws 10 watts of energy, and is not quite as bright as the tube.  However, this light comes on instantly, has no flicker, and should not require replacement for quite some time, if ever.  LED lighting is much more directional than incandescent and fluorescent, so I am already thinking I may want to add something to diffuse the light a little, Since this closet has a ten foot ceiling, it is not that much of an issue, but if the closet were bigger in width and/or shorter in height, this would likely be a necessity.

Not only do I get satisfaction of creating something new, I am also delighted that I will never again have to get out the ladder to replace that tube ever again!

I always spent my half an hour to read this weblog's articles all the time along with a cup of coffee. Take a look at my product: vintage lights

Hello! I'm at work surfing around your blog from my new iphone 4! Just wanted to say I love reading through your blog and look forward to all your posts! Keep up the fantastic work!

I'm glad you like the blog, thank you for reading!

I love your Vintage Lights site - old nautical lights have always fascinated me, and I really like what you are doing with them. Are they fully restored to oil or with electrical wiring? Have...

I'm glad you like the blog, thank you for reading!

I love your Vintage Lights site - old nautical lights have always fascinated me, and I really like what you are doing with them. Are they fully restored to oil or with electrical wiring? Have you considered LED retrofits? One of those beautiful oil lamps with an LED emitter and a circuit to give it a slight flicker would just be awesome. Thanks for sharing.

Where do you get your LED strips from?

to our friends, thanks to the site administrator you really did a good job.
This site is full of valuable ideas and significant information which we can share