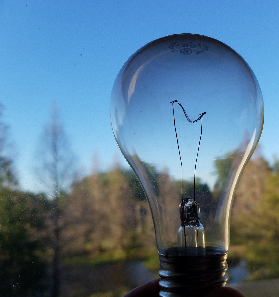 I recently received an email from a reader who passed along a lot of links to sites that are the same theme as this one.  I took a look at her beautifully rendered site OurPreciousResources.org, and liked the message - ecology just one small step at a time.  The thing I like about that message, and what I try to promote, is just think about your day to day and your living environment in a critical way to see if you are doing it the most energy efficient way possible.  I like to put the engineering twist on it myself.  As an example, my front porch lights burned out frequently when I used to use incandescent bulbs.  They cost about $1.90 per bulb, and between my two fixtures, took a total of six bulbs.  I would end up replacing them nearly every year just due to exposure and burnouts (they weren't really on that much).  I tried CFLs when they became more affordable, but at at over $5 per bulb, and having no longer of a lifespan, it seemed like a foolish waste of money.  LED bulbs came along, and as an early adopter, I paid the premium price of $8 per bulb.  That was about five years ago.  They are still going strong and use a fraction of the energy the incandescent bulbs used in the beginning.  Not only have they paid for themselves by not having to replace them, they take way less energy, their eventual disposal is less harmful to the environment than CFLs.  One lesser known bonus feature of an outdoor LED light - they don't attract bugs like CFL and incandescent bulbs do; the narrower band of light (no UV and little infra-red) makes them less attractive to bugs.

In short, switching to LEDs was a small step, but with many benefits, not just to myself, but to the environment.

I started digging through the links from her email that I thought were the most interesting and will start sharing them.  The first one links to a good place to start if you aren't as geeky about these things as I am.  Take the energy efficiency quiz and see how you do (hint:  I gave you your first answer above).  This site is actually sponsored by an energy company, but the quiz might start you thinking over how much energy stuff around your house uses.  It might even guide your next appliance purchase.    The site is put up by Constellation Energy Resources, and the quiz can be found here.  Tip-o-the-hat to Ginger for the nice email!

IKEA Gets It: Zero Emissions is Smart Business

There Is No Such Thing As A Free Lunch

The Many Benefits of Living and Working Locally

Why Australia's New Batteries Are Important

By accepting you will be accessing a service provided by a third-party external to http://www.green4geeks.com/