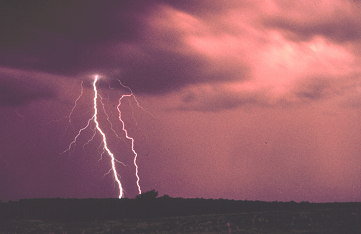 I've always heard that West Central Florida was the lightning capital of the world.  Living in the region, one could easily be convinced that is true.  On a warm summer evening, using unassisted, ground based observation only, you would be hard pressed to keep count of the flashes in just a single hour, let alone an entire evening.  Just how much lightning does strike in a region?  Can you determine when it is going to strike in your area?  The answers to these questions are not as easy to come by as you might think.  Both the National Weather Service (NWS) and National Oceanic and Atmospheric Administration (NOAA) have strike maps, data, and even some real time detection networks.  They have funded studies at a number of universities and even some commercial contracts to get the answers to these questions, but it is very difficult to find any real time data for "where I am right now", that is easy to use.  There are plenty of commercial sites if you look long enough, such as local TV stations, and even a handful of regional government funded sites for certain city/county/regions, but nothing on the scale of the commonly available temperature or weather maps that we are accustomed to.   Read on through to the end to find one solution that may trump them all.

Why is this important?

According to the NOAA Lightning Fatality Statistics (yes, they keep track), the continental United States has an average of 51 fatalities a year due to lightning strikes.  They keep track of a remarkable amount of detail related to this, including the fact that neither Alaska or Hawaii have any recorded fatalities due to lightning.  As expected, Florida did have the highest amount compared to the other states, with Texas (in second place) only having half as many.  Their site goes on to break it down in a number of other ways as well; with Wyoming taking first is the most fatalities per million, and many other breakdowns.

A long story made short, it would be really, really nice to be able to know when you should worry about getting struck, and to avoid it.  Real time detection would be nice, but it is hard to come by.

So where does lightning strike most?

As it turns out, Florida may be number one in the United States, but in the world, it is beat out by several other places.  Number one is Rwanda in South/Central Africa.  It gets over four times the amount of lightning that Florida gets (per square kilometer).  The following map is from NASA's Lightning Imaging Sensor Instrument Team and the Global Hydrology Resource Center (GHRC): 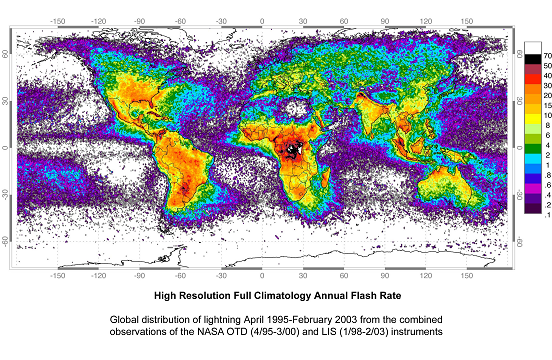 This map was created by a satellite borne optical sensor that detects the flashes made by lightning.  Optical sensors like these require compilation and download of the data, so they aren't exactly real time.  In fact, the above map was data collated over eight years.

For near real time data, there are few other sites worth taking a look at:

Now for what I hinted about at the front of this article; real time data in an easy to use and understand format.  There is a site called Blitzortung.org out of Germany that in my opinion, hits it out of the park.  It has it all - as close to real time as you can get, world maps, regional maps, strike history (up to two hours), live strikes, sound, and it even shows you where their detectors are that are used to triangulate the strike data. 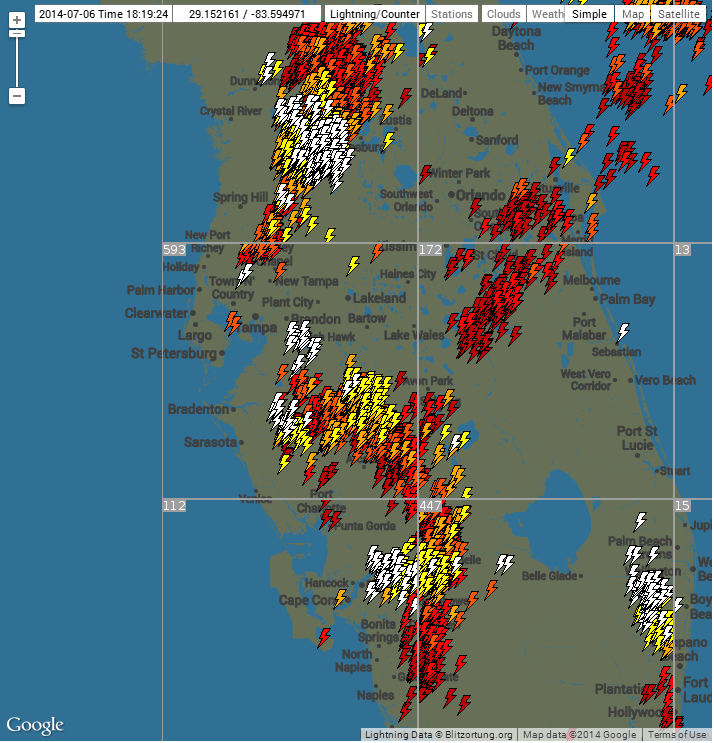 Displayed here, is a static map pulled from the site, that is updated every 30 seconds.  The live map of the same area, must be seen to be truly appreciated.  After trying out several of the sites options, and looking at various maps from around the world, I noticed that the "Delay" indicator was never higher than 4.5 seconds while I was viewing it.  As I was writing this article, there was quite a lot of lightning activity near me, and the site accurately reflected what I was experiencing.

This is clearly a community based effort, and has disclaimers all over the site to warn the user that it is to be used for non commercial use only, and that the data provided is not to be used for anything but entertainment, private, and non-official use - keeping themselves far from any liability issues.  That being said, in my opinion, this site trumps every other site I have seen so far, both in real time results and in accuracy.  The way it works is that there are several hundred detectors around the world, all contributing to the network that feeds the site.  By triangulation of the radio waves that a lightning strike gives off, the precise location and magnitude of the strike is calculated and displayed on the map, using an expanding white ring to indicate where the strike occurred.  This is every bit as good, no, better than any official site I have seen so far.

One of the coolest things about this effort is that you can participate.  For less than 200 euro (less than $275 USD at the time of this writing), you can purchase one of the lightning detector kits, and be a data provider for the network.  It is an all volunteer network of contributors, who work on refining the algorithms, improving formulas, or simply just providing a detector station.  If you have some "maker" tendencies, as I do, you may want to just purchase the circuit board and the micro-controller chip and build your own.  There are also complete kits or completely assembled detectors that just need to be plugged in and configured.  The more detectors in the network there are, the more refined and accurate the data becomes.  There is extensive documentation on the site, including complete plans for building your own receiver.

I'm struck (no pun intended) by just how usable the maps are.  I even hit the site with my android based smartphone, and the maps displayed perfectly.  There are no warning features or alerts like you might have on a commercially available lightning detector, but there probably is a way to use the data off of your own detector to be used for that purpose.  Use of your own collected data seems to be encouraged.

Of course, you can always use the tried and true method, using the difference between the flash of the lightning and the boom of the thunder to estimate the distance of the strike.  As children, many of us were taught to sart counting off the seconds from the flash to the thunderclap by saying one Mississippi, two Mississippi, and so on to mark the seconds.  The visible light from the lightning travels at 186,000 miles per second.  Sound only travels at about one fifth of a mile per second.  So, if you count the number of seconds from the flash to the boom, then divide it by five, you will have a rough estimate of how many miles away the lightning strike was from you.  Example:  Flash....   ten seconds elapse....   Boom!  Divide the ten by five, and your lightning strike was only two miles away.  Time to take cover.

NASA's where lightning strikes most:  http://science.nasa.gov/science-news/science-at-nasa/2001/ast05dec_1/

Today wireless energy helps us with transferring electromagnetic energies. We can utilise the best professional writing services[/url] to know more about the benefits of wireless energy. One of the best benefit is you can on ur tv , ac through...

Today wireless energy helps us with transferring electromagnetic energies. We can utilise the best professional writing services[/url] to know more about the benefits of wireless energy. One of the best benefit is you can on ur tv , ac through wireless remote.

Today wireless energy helps us with transferring electromagnetic energies. We can utilise the to know more about the benefits of wireless energy. One of the best benefit is you can on ur tv , ac through wireless remote.

Today wireless energy helps us with transferring electromagnetic energies. We can utilise the best professional writing services to know more about the benefits of wireless energy. One of the best benefit is you can on ur tv , ac through wireless...

Today wireless energy helps us with transferring electromagnetic energies. We can utilise the best professional writing services to know more about the benefits of wireless energy. One of the best benefit is you can on ur tv , ac through wireless remote.

Excellent article. Very interesting to read. I really love to read such a nice article because it is very informative and useful for me. Thanks for nicely sharing.