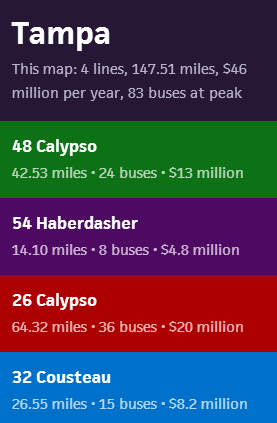 I have always been interested in studying the efficiency of any system, regardless of the scale of the system.  I have played numerous "sim" games over the years, including ones that built railroads or even entire municipalities.  I've always really liked the ones built on railroads, like the old "railroad Tycoon" games.  One of the challenging aspects of these games was that you have to find the right balance to be successful.  If you overdevelop your infrastructure, you can't afford to finish it, but if you don't put in enough, you don't get the return revenue to support it.  You get the picture.  Wouldn't it be great if you could put together your ideal map based upon the community in which you live?  Maybe now you can...

Recently, I came across a site that I couldn't wait to share.The site is called Tansitmix.  I live in the Tampa Bay area of Florida, and this community has struggled with transit issues for some time.  I've seen various maps drawn up, published in the media, and debated time and again.  I usually look at the maps and say to myself, "What are they thinking?  I could do better than that!"  Now I can put it to the test!  Click here to see a quick map I created on the site.  It plots bus routes for whatever city you choose, and allows you draw your own transit system.  This was one of my first attempts, and I'm including it here for demonstration purposes.  I have since played around with some other areas and have really had a lot of fun with it.  So far, I have not hit any limits on routes.

Using it is pretty simple.  Once you have selected your city, you start adding routes.  It builds out a beautiful color coded map that includes all of your routes, how many buses it would take to support your route, the number of miles and the cost per year.  I like that you can go in, remove routes, edit them, and play around with your design.  If you like, you can even design an express route that goes right from your house to where you work.  It doesn't list ridership data, population of areas served or any of the other hard stuff that city planners actually have to do, but hey, it's good to be the king!  Perhaps you want to sketch out a design to send to your local transportation officials as a proposal.  Once you have completed it, simply click on the share link, and you have a ready made map to send right to whomever you want.

I sketched out a small, four route system, that probably wouldn't win any community achievement awards, but I just wanted to get an idea of how it would look.  Here is the result: 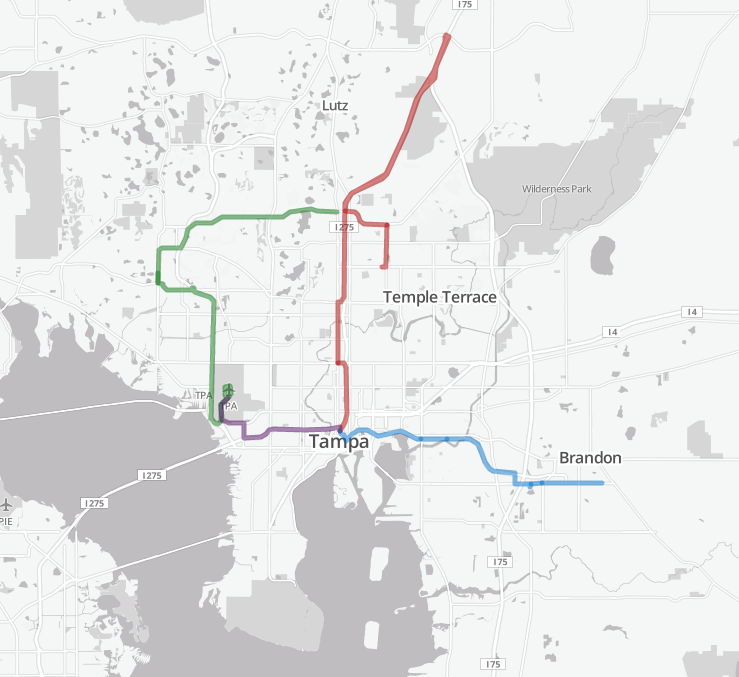 As far as efficiency and public good is concerned, I quickly realized the implications of even a subtle route change.  I gained a new understanding and appreciation of how difficult it must be to decide where to put the long haul routes, the express serviceroutes, and transfer stations.  Even though there is no game element such as reaching certain achievements, I did enjoy trying to make it run more efficiently, or at least at a lower cost.

I don't know if there are plans to add rail, or other transportation options, but I sincerely hope so.